Written by Kerri Lloyd
Published on May 7, 2016

Did you know Lafayette Hall was once a shopping mall? 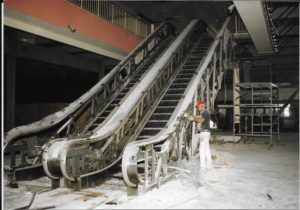 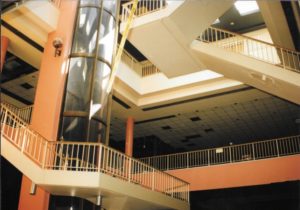 The mall had escalators and a glass elevator, both ripped out at the time of construction. The second floor balcony and the parking garage also remain the same.

Mayor Joseph P. Ganim attended the groundbreaking ceremony in 1995, just as he did a few months ago for the newest addition to Lafayette. 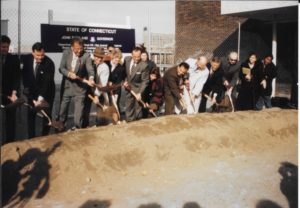 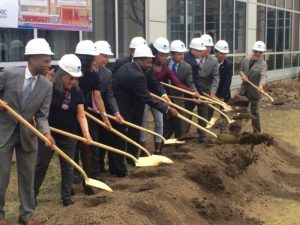 It may also come as a surprise to learn Beacon Hall is a former Sears Department Store. Almost twelve years after the mall takeover, HCC became a two-building campus. This time, the interior of the new building was entirely gutted.

Connecting Lafayette and Beacon’s history to modern day gives context to the upcoming improvements at Lafayette Hall. It’s been almost another decade since the campus has grown.

Between the two buildings, you may have noticed another bit of trivia, the placement of two  white pillar structures. It is an outdoor sculpture garden, created shortly after the shopping mall conversion by the HCC Museum of Art. 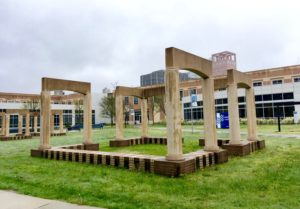 Artists Alexander Liberman, Lila Katzen, Elyn Zimmerman and others have contributed their works.

The museum itself was installed at the same time the shopping mall was converted. Named for its founder, The Burt Chernow Gallery opened with an exhibit of 20th Century Art.

In 2001 Ansel Adams Classic Images was exhibited, with many of the photographs on public display for the first time. More than 8,000 visitors came to view the exhibit.