In cities with unique characteristics like Bridgeport, the least explored areas tend to hold the most promise and intrigue.

Bridgeport is grounds for fascinating sights in little known places. Many unexplored geographical marvels can be found in this city if you know where to look.

Seaside Park in Bridgeport is a spacious recreational park with many different areas for numerous activities.

View of the beach at Seaside Park from a distance. Photo by Isabelle Brown

At this park there are baseball/softball diamonds, playgrounds, a beach, a boardwalk, a beautiful walkway, and even a concert stage.

At this stage, the Annual Gathering of the Vibes came to Bridgeport and people from all over the country joined together for a weekend of music and celebration.

Last year the Vibes were cancelled and discontinued due to police controversy. Many long time fans of the show as well as performers were angered by the break of tradition.

According to History of the Vibes, an average of 25,000 people attended each year since its arrival at Seaside Park in 1999.  Although it drew such a crowd, it is not a well known fact that The Vibes took place right here in Bridgeport at Seaside Park.

In the middle of the park is a huge statue of Christopher Columbus, tall and proud, erected in 1965 for the people of Bridgeport. 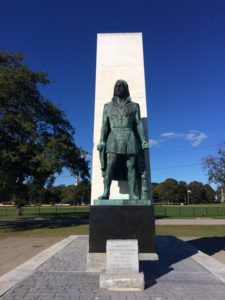 “Working at Seaside is a great opportunity to learn,” parking lot attendant Christian Perez, 18, said. “There is a lot more history here than people know of. When kids come for sports or family picnics, they all love to ask and learn about the statue and the other landmarks at the park.”

A little further south is Black Rock Harbor with a beautiful coastline to dock boats at. There is also an island with Fayerweather Lighthouse, built in 1808. People can walk to the island and see the classic beauty of this historic landmark.

Right along the harbor is Ellsworth Park. It has a direct view of the waters of Black Rock Harbor and is a quiet and peaceful area.

It is home to the Bridgeport softball and baseball teams. There is always a game going on at this park, with an innovative playground next to the field equipped with inground sprinklers for children.

This park has been the home field for Black Rock little league teams since 2005. Stratford softball coach Dan Brown has been  playing at Ellsworth Park since 2007. 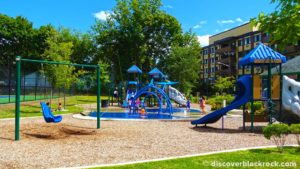 “The community has put a lot into this park,” Brown said, “and still, not many residents of Bridgeport know it’s there. My team won three championship games here. Ellsworth is a place for families and local history.”

Neighboring towns Stratford and Bridgeport have always had a friendly rivalry on the field, and Ellsworth Park has helped keep it alive.

Black Rock Harbor also has 11 acres of land that make up the beautiful coastline of St. Mary’s by the Sea.

Established in 1922, its walkway has been a scenic place to boat, fish and enjoy the scenery of coastal Bridgeport.

There are always fishermen, both local and travelling, along the cliffside of the water.  Their lines are cast far into the deep waters of the harbor, with buckets of fresh bait and coolers packed.

Local Bridgeport resident David Shea has always fished for recreation at St Mary’s by the Sea. “I caught the biggest bluefish of my life here two years ago. Since then, I won’t cast my line anywhere else,” Shea said. “I’ve lived in Bridgeport all my life and only just found this place,” he said.

These hidden gems of Bridgeport, may not be well known, but are definitely appreciated by those who care to experience them.