Is She Really A Devil In A Dress?

Patrice Brown is a fourth-grade school teacher who has gotten a lot of positive and negative feedback for the controversial way in which she dresses herself. Because of the clothing Brown chose to dress herself in, she has been sparking some heated arguments on social media. Many people defended her while others thought that what she was wearing was inappropriate and she needed to be punished for the way she presented herself. My honest opinion on this situation is that her dress attire is very school friendly, except for a couple of outfits.

Many people also felt that she was violating the dress code policy, which she actually was.  However, most of her outfits were considered to be appropriate except for a few, according to her school’s dress code. It states that skirts, blouses, jackets, and business suits are all acceptable which is what she was wearing in most of her photos so she was following most of her school’s policies. However, in some of her pictures she was also seen wearing tight dresses and spandex, which isn’t acceptable according to her school’s dress code. Because of her provocative way of dressing, she was forced to set her Instagram account to private after all of the extra attention her pictures were getting from the media. 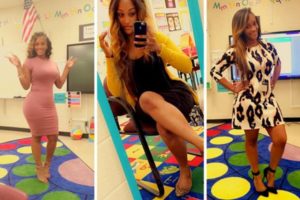 One can assume that the only reason why parents have been so concerned with Brown’s attire, is simply because of the way that her body is shaped. We live in a society where people claim to be very accepting towards women of different sizes and shapes, and yet those same people will turn around and give a woman criticism just for simply having a curvy body. If this woman had a pencil thin frame, nobody would even bother to speak about it.

Laura Turiano, a general psychology professor who teaches at HCC said that “I have mixed feelings about it because I feel that she should dress in a way that she feels comfortable and reflects her own personal style.” She also goes on to say that “Her outfits detract from her role as a teacher, in a way that it draws attention to her, and not the learning process.”

Brown has definitely had a lot of things that’s distracted her from her teachings because of all of the people that’s been body shaming her all over the blogs.

It’s crazy how instead of talking about the quality of her teaching, the media focuses more on how tight her dress is. She’s a very educated teacher who has all of the credentials to excel in her profession and at the end of the day that’s all that really matters.

When Turiano was asked does she think that Brown should be punished for the way she dressed, she simply said “No. I don’t think she should be punished, I would if there’s a dress code.” Turns out there is a dress code and the school district did give her a warning about her clothing, so I guess that can be looked at as a punishment within itself. I feel that HCC students can definitely relate to this topic because what if this happened to someone on campus? What if one of our favorite professors were to end up losing their jobs because of an incident like this happening to them? I would hate to end up losing a good teacher and missing out on an education simply because of something so small and insignificant like this.

Hyoja Tully, who works in Lafayette hall as a math instructional support specialist, was also asked about her thoughts on the way Brown dressed and she said, “She looks confident, happy, and comfortable.” She was also asked if she felt that the way this woman dressed was inappropriate for her profession, and she responded by saying, “I don’t think so. If we’re talking about a college setting absolutely not”.

She was also asked if she feels that this woman should be punished for the way she dressed and she said, “No. The fact that this woman has more curves may bring more attention to what she is wearing, but I do not think it is inappropriate”.

The point that needs to be made here is that Patrice Brown was a victim of a very common issue that occurs with women today and that issue is body shaming. There were people on social media who were calling her a “thot”, a “slut”, and all other types of demeaning names simply because of the way she is dressed. What really disturbs me the most about this issue is that instead of judging this woman by her credentials, and by the quality of her teaching, she’s strictly being judged off of her appearance.

It’s sad to see women still going through these type of problems in 2016. Brown is a very skilled professional who has an extensive background in teaching and she was following most of the policies that the school dress code requires employees to follow. Yes, it is true that she did violate a few of those policies, but to punish her for something like this is going way too far. The body shaming needs to stop, and people need to stop being so judgemental towards people who don’t even deserve that type of criticism.

She’s not Amber Rose or Blac Chyna. She’s not a stripper, and she’s not a prostitute. She’s a professional educator who deserves to be treated with the utmost respect.

So with all that being said, the question that needs to be asked is are people just making a big deal out of something that was never even an issue until it became public to the media? Or is this woman really just a devil in a dress?