Building The Future Through Popular Music

During this year’s BET Hip Hop Awards rapper Big Krit gave a powerful spoken word performance addressing police brutality, joining the ranks of countless musicians who have spoken out about societal injustices. Today it is common for artists like Kendrick Lamar and Vic Mensa to use their platform to promote awareness of wrongdoings, while artists like Macklemore and Alessia Cara are giving mainstream voices to people who have never been fairly represented.

Through exposure to music more support than ever has been generated for ethical issues like those listed above.

Daniel Corr, a Housatonic music teacher, related the phenomenon like this:  “I think as a teenager you’re really focused on what you’re doing and the people directly around you, but for many people music is a glimpse into a bigger picture.” 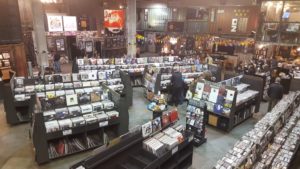 Music lovers browse through Rough Trade Records in Brooklyn looking for their next piece of inspiration.

Perhaps one of the most stirring glimpses into the big picture was Beyonce’s performance at this year’s Superbowl halftime show in which she, through conjunction with her “Formation” video, generated headlines bringing awareness to the struggle of black Americans.  EDM DJ Bassnectar treats his performances in the same way, utilizing video and audio samples to promote love and cultural awareness to his fans.

“Music is an important part of popular culture, it entertains us, and so it is a great platform for discussions on social issues. Concerts are particularly effective because artists have the opportunity to address large crowds. For social messages to take root, they must be accepted by large numbers of people, and individuals are more likely to accept these messages if their peers do,” she said.

Thankfully due to social media and other Internet avenues, even concerts aren’t a necessity to promote a message to countless people.  Now if something is thought provoking enough, or simply filled with controversy, people will become aware of it through the twittersphere or something similar.  To some people, including psychology student Maria A., this raises a question of responsibility of the artists.

“I believe artists have a responsibility since they’re so popular and so many people follow them.  [socially conscious music] has always been around but now there’s a lot more awareness due to social media.  It has a big impact, I feel like a lot of people can bond over it and start a conversation,” she said.

With so much accessibility to music from all ends of the spectrum, the question has to be raised about whether or not more violent forms of music are having a negative effect, and counteracting the “good” music out there.  While genres like hip hop and metal have been consistently criticised for glorifying violence and hate, it has often been stated that those songs are simple reflections of reality.  While many murderers have been documented listening to violent music, psychology professor Tonya Rondinone says that is not the artist’s responsibility.

“Whether or not music can have a negative effect depends on the individual and where they are in their life, “ she said.  “The music may intensify the feelings the person is already experiencing…If someone is influenced to do harm by musical lyrics, more than likely that person already had some underlying psychopathology that is energized by the music.”

When it comes down to it artists are simply making music to express themselves and talk about their story. Still, that story, often filled with pain and hardship, reaches countless people, and that alone can inspire the change needed to make sure the everyman does not go through the same thing.

As Rondinone puts it: “While some music may be written with the intent to call people to action, it ultimately depends on the person listening on whether he/she will respond.”