No, You Can’t Speak To the Manager

Tips on Being a Better Shopper (And Decent Human Being)

The holiday season is well upon us, so now is the best time to take stock of how crappy people really are when Christmas shopping glocks them square in the teeth (and their bank accounts). Maybe you were kicking and screaming your head off about how there weren’t enough associates working on Black Friday. Or you were on the receiving end of a bitch fit of massive proportions because their rude asses wanted to wait for the last possible second to get Christmas presents. Whatever the case may be, it’s safe to say that the holidays are the furthest thing from your mind right now. 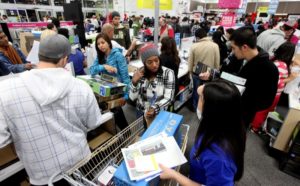 Customers shop for electronics items during ‘Black Friday’ at a Best Buy store on November 25, 2011 in San Diego, California. (Photo by Sandy Huffaker/Getty Images) Used by permission of Brittanica ImageQuest.

Surely there should be some etiquette to how people should shop, not just during the holidays, but year round. I mean, were you raised in a barn with no manners? In a back alley somewhere with the wolves and heathens? Are you, in fact, a retail nightmare store workers dread whenever they see your face approaching them?

Theatre major Molly McFarland expressed her fears working at Lord and Taylor during the Black Friday weekend seeing as it is her first job. “I was really nervous. Like, the day of, I was dreading it,” she stated, also mentioning the packed Macy’s and Lord and Taylor parking lot psyching her out.

One thing shoppers may worry about is when to actually go in for Black Friday. There are the dedicated souls who fight the urge to pass out after their Thanksgiving meal to stay up for midnight openings of their favorite stores. And there are those who are much more laid back in terms of getting there when they feel like it. Either is fine, but expect a rush at any time.

HCC student Michal Ticsay pointed out how the rush of customers came after 12 o’clock, his job being at Old Navy. “I feel like those are all of the people that are ‘casual’ Black Friday shoppers,” Ticsay explained. “But if the majority of them are casual, then everyone casually goes in and casually forms a line to the back of the store.”

Another thing shoppers don’t really realize is that a lot of the associates who are hired aren’t even a month into these jobs, so they may not have all of the information on how setting up discounts work. “If anyone wants to work in retail, don’t. Either that or don’t be new,” McFarland commented. “Because we had a bunch of people that were new, and literally Black Friday was their second week.” Experience is the major key on Black Friday.

Both McFarland and Ticsay became passionate when the topic of difficult customers came up and if they had them over the discount weekend. “Are you kidding me?!” McFarland said. “I had all these sorts of people fighting me on the sale.” These are the stuff of retail horror stories we are often told about on Black Friday.

“I was about to throw hands at people on Black Friday,” Ticsay added. Both of them stated that it does have to do with stress of finding a good present when it comes to bitter attitudes and the like when customers go shopping.  Not that said horrid customers actually care about the feelings of retail workers or anything. Shoppers should keep in mind that not getting that ten dollars off those athletic tights won’t be the end of the world, not in the slightest.

And it’s not like you yelling at them will entirely affect their day. “If I have a jerk, I’m like ‘whatever, yell at me, curse at me, I don’t care’ because I’m not getting fired. I’ve heard it all before,” McFarland said. The world will keep spinning. And most likely, you will still be up in bed, thinking how you should have gotten that extra 15 percent off those cowboy boots.

The silver lining in the Black Friday chaos is that it does make the nice and courteous customers all the more appreciated. “So to everyone reading this article: be good to people to retail because we deal with a lot of jerks most of the time.” McFarland said. She also has a word of wisdom to those who do get a job in retail.

“Just know what you are getting into. You’re gonna get people that are having a really bad day and who want to take it out on a poor, innocent stranger,” she said.