The Next Step: Promoting The New Hip-Hop Renaissance

If you ask any serious hip-hop head what the golden age of the genre is, they will most likely tell you it was somewhere in the 90s.  It was a time where rappers had moved past the fun and often cheerful roots of the genre and were using it more as a tool to describe the dark and troubled realities they were living.  This new representation of reality was paired with advancements in production, allowing for a cleaner and more accessible sound, as seen with artists like Biggie Smalls, Outkast, Jay-Z and more.

Today hip-hop seems to be going through yet another reinvention of itself, moving away in part from the criteria laid down by the “gangster rappers” of the 90’s in favor of a more diverse and positive output.  Hip-hop as a whole recognizes its influence, and as a result people like Kendrick Lamar, Logic, and Chance The Rapper have risen to challenge what a rapper can be, and by extension the message they can promote. 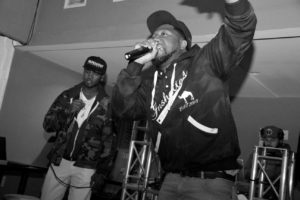 Once again this new narrative has been met with new possibilities in the beats rappers can spit on.  The transition to digital production has opened up a whole new world for producers, allowing them to work closely with their artists to create sonic experiences on a scale that was simply not possible before.  Together these progressions in the genre provide a unique opportunity for hip-hop to once again become a driving force for social change, and a motivator for people who feel lost in a world where the odds seem stacked against you.

Enter mumble rap, the new form of party music that has overtaken the hip-hop mainstream.  Party music is nothing new to the genre: in the mid 2000s the sounds of the southern strip clubs saw mainstream success, as seen with crunk king Lil Jon.  Today Mumble rap has also utilized digital production to create some of the hardest hitting, and most immersive music that radio and clubs have ever seen.

While this music has a time and a place, the problem comes from it being constantly shoved down the throats of listeners, lowering the bar for the genre, and by extension, what we expect from our youth.  Gone are the positive lyrics about personal growth and creating a better world, instead near inaudible lyrics about money, clothes, and hoes become the focus, further perpetuating the stereotype that parts of society have come to expect from a community that has worked so hard to exemplify its diversity.

With some much life-changing music available, it SHOCKS me that this watered down garbage is what has been pushed to the forefront of people’s reality.  Thankfully, with the power of the Internet we have the ability to promote the music that can really make a difference in a world that seems to be in a downward spiral.  If you are a fan of good music, I implore you to do a little digging, to share what you find, and to help bring to light the new golden age of hip-hop that is just waiting to be discovered.