Many of us here at Housatonic aren’t aware of our art gallery, which is one of the best art galleries in Connecticut starting from 1886. Here, we feature new artists and every season there is a new exhibit! People that are aware of the art gallery just assume that it is all student work but, really, it is all featured artists. 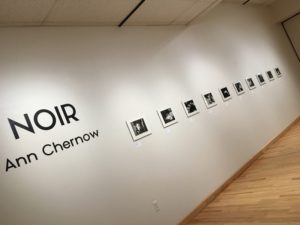 Glimpse of the Art of Women in Film by Ann Chernow

This season, our current exhibit is Rendezvous in Black featuring two solo black and white shows by Cindy Sherman and Ann Chernow. The first feature is called Noir, which shows the art of women in film. Noir emerged in the early 1940s in a handful of American studio system films. These photos all show a use of different shadows, night scenes and low angle shots since this film was shot in a dark populated city involving detectives, criminals, corrupt officers and dangerous women.

In Rendezvous in Black, Cindy Sherman and Ann Chernow draw from the film noir to create unique pieces that show a glimpse of scenes that could have appeared on the movie sets. Sherman’s series is different and stands out from the rest because it isn’t your typical Hollywood myth.

Here at the Housatonic Museum of Art you will see these photos coming to life with a quote under each one. The shows for this exhibit will be running from November 10 to December 16.  The museum will also screen classic film noir movies throughout the exhibit, including “The Maltese Falcon,” starring Humphrey Bogart, and “Night of the Hunter,” starring Bridgeport native Robert Mitchum and will have two women playing the role of both Ann Chernow and Cindy Sherman.