There’s nothing I love more than a new CD release. Well, that is unless we’re talking about the band the 1975, who just released their highly anticipated third album, A Brief Inquiry Into Online Relationships.

The album is a breath of fresh air for those music connoisseurs who are looking for something zesty and flavorful as we head into the colder months. This 15-track CD does not disappoint. Fans will get goosebumps as they listen to the vibrant melodies, and quiver as they hear the melancholy, yet beautiful sounds coming from singer Matty Healy’s mouth.

The 1975 are a band that hugs your soul and frees your mind. They’re not trying to be just like every other alternative rock band out there. They put out the kind of music you listen to on top of a rooftop, looking at the stars, wondering what life’s true purpose is. They’re also a band who is there for an emotional breakup with said person you were up on the rooftop with. A Brief Inquiry Into Online Relationships upholds that very same ideal that will welcome new fans alike, as well as pacify the older ones. 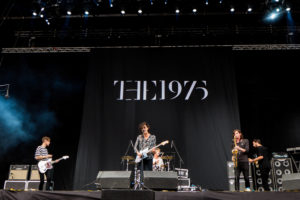 A shot of the entire band doing what they do best at a live show. Photo courtesy of Wikimedia Commons.

Over these past six months or so, they released five singles that had us begging for more. “Give Yourself A Try,” “TOOTIMETOOTIMETOOTIME,” “Love It If We Made It,” “Sincerity Is Scary,” and “It’s Not Living (If It’s Not With You), which were all brilliantly received.

“Love It If We Made It” is the kind of song that makes you want to save the world. It speaks about all of the corruption and lies that take place under our very noses. It deals with how immune and desensitized we have become to the horrors of this world.

“It’s Not Living (If It’s Not With You)” is a dancy, yet haunting track that has you thinking of that special someone that compliments your life quite well. Seems as if it’s about a lovesick person who can’t get that one true love out of their head no matter how hard they try. In the end they just give in. Unfortunately for Matty, that special someone was drugs. He has since been clean and healthier than ever.

The 1975’s sophomore album I Like It When You Sleep For You Are So Beautiful Yet So Unaware of It was such a smash success that left many wondering if they could release something just as good for their follow up release. Let me tell you, there’s no need to fret about such nonsense.

Tracks like “Be My Mistake,” “Inside Your Mind,” “I Couldn’t Be More In Love,” and “I Always Wanna Die (Sometimes)” have us in our feelings.

“Be My Mistake” will have you wanting to call that ex that you did wrong and that you still think about. “Inside Your Mind” sounds like the type of song you’d hear in a movie when the main character realizes he or she made a grave mistake and they must fix it immediately. So they hastily run away from wherever they are to go find that person that makes them feel whole again.

“I Couldn’t Be More In Love” sounds like an R&B song straight from the mid 90s about appreciation for a particular person. You know the one, the “ooh baby baby” type of lyrics, with a jazzy bass vibe, and a slow, sensual guitar solo thrown in for good measure.

“I Always Wanna Die (Sometimes)” is very similar to the song “High and Dry” by Radiohead. The 1975’s album is even being compared to OK Computer, one of Radiohead’s most successful albums. Not a bad comparison.

The 1975 are saving the world, one millenial at a time. Stream or pick up a copy of A Brief Inquiry Into Online Relationships now and see exactly what I mean.