Written by Louis Verderame
Published on May 6, 2020

Starting a new class is always tough. You don’t know the professors, and the professors don’t know you. The first couple of days of school are always a bit of a rocky start. A lot of students jump to a conclusion at the first sign of inconvenience that this class isn’t for them and they drop the class. a mistake that I almost made.

I’m mostly a shy student who sits in the back of the class because I hate having people sitting behind me. (“Hey Lou, phone’s ringing. It’s Paranoid. He wants to talk to you.”) When I got to this class, all the seats in the back were taken, so I quickly saw a seat in the second row and sat there. This class was already not looking good.

After the first day, I said to myself, “This is not for me.” His style of teaching just wasn’t what I was used to. I believed my words so much, that after the class I went to Lafayette Hall and picked up an add/drop form. I was ready to drop out of this class. Unfortunately, for me, at the time, there was no available class for me to switch into that would accommodate the elective that this class covered. I was stuck, but what was an unfortunate situation, turned out to be a VERY fortunate situation in the long run.

I went to the class each day nervous and on edge because I didn’t know what to expect next. Are we writing today? Are we getting up and presenting something? What the hell are we doing now? I kept thinking, just get through today, and it will be good.

I don’t know when my attitude changed for this professor, but it did. He was eccentric, yes, loud, yes, but, through all that, he was wanting the best out of his students. He brought his class together in a way that I have never seen before. He’d make the class laugh and shout out our names in examples. What for me was nervous laughter at the start eventually turned into legit laughter.

Another thing we did is introduce ourselves to one another in groups of three or four, and every week we would be in a different group, doing it again. We all learned each other’s names and went through this awkwardness together, which bonded the class. Now that I look back on it, it was probably by design. Sly Captain, very sly.

I changed my tune and was excited to go to his class. I kept my add/drop form in the back of my notebook as a quiet reminder that what I thought in the past was wrong, and that I should look forward to the future and take on challenges as they present themselves.

Having made it through his class was something I never thought I could do. It was everything I wasn’t used to, but that’s life, right? When things get thrown at you, it’s up to you to make the best of the situation and keep moving forward. I’m happy I stuck with this professor, because he turned out to not only be a great professor, but a good person too. I learned a lot about the literature in the world, and a lot about myself as well. 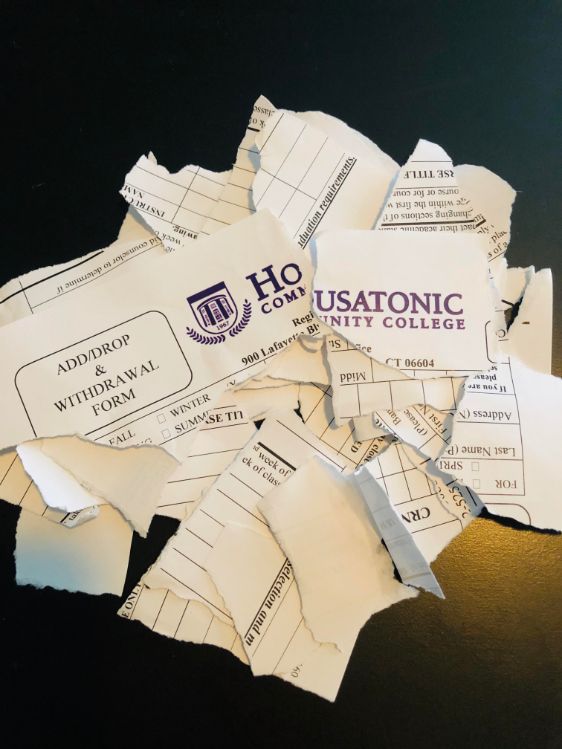 I ripped up the add/drop form as I finished this article. Photo by Louis Verderame.