A Resume-Booster for the Politically Inclined

Ever wanted to follow a state legislator around? Housatonic students interested in politics or careers in government, public service, or law can apply for the Spring 2016 Connecticut Legislative Internship Program, which is open to Connecticut residents from all of the state’s colleges, both public and private. The program gives students the opportunity to experience our state’s political processes firsthand, work directly with legislators, make valuable professional connections, and earn six course credits.

Samantha Mannion, HCC’s campus advisor for the program, explained how the internship can be tailored to your interests.

“Once you’re accepted, you’re asked about your background, party affiliation, and areas of interest and you get paired with a legislator based on that information,” she said. “You shadow that legislator everywhere, you’re brought out to the floor and introduced, and you get the chance to draft legislation.”

The General Assembly’s website states that the intern’s duties include conducting research, attending public hearings and committee meetings, responding to constituents’ needs via email, phone, and in-person. They’re also required to attend House and Senate sessions, as well as the tracking, analyzing, and reporting of proposed legislation, among additionally writing letters, citations, speeches, and testimonies.

The academic component of the internship follows an “experiential learning model” and includes a formal two-day orientation program in addition to optional training opportunities, an overview of the legislative process, and an introduction to research techniques and resources. 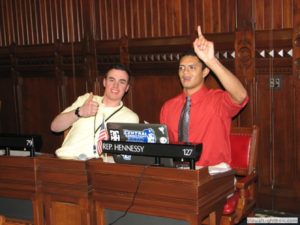 Though the internship is unpaid, networking opportunities abound, and landing a paid position afterwards is not impossible.

“I actually lost two students who did the internship because they got hired as full-time legislative aides,” Mannion said.

Beyond being a Connecticut resident, students are required to have earned a minimum of 20 credits with at least a 2.5 cumulative GPA, be registered for a course at their school that grants internship credit, have exceptional verbal, written, and critical thinking skills, proficiency in computer processes.

Essentially, they will “learn the legislative process through hands-on experience.”

Students from all disciplines will be considered, though the General Assembly’s website states a preference for upperclassmen and “students whose experience and academic background offer some preparation for the work they will undertake.” Contributions to applicants’ college and community are also considered, as well as “the applicability of the internship to future career goals.”

Those interested in applying should contact Mannion at 203-332-5168 or [email protected] The deadline is October 29th, with interviews to take place in December.